Buried downspouts are an essential defense against damaging water for our homes and yards. The most effective drainage systems run on a slope and move water quickly away from our homes. Today, we’re going to teach you how to get more slope by using a 3-inch corrugated pipe. Using 3 in downspout pipe will give your roof runoff system a higher velocity. And bonus – it’s also the easiest pipe for DIYers to install.

To keep that water moving, we’re also going to teach you to drop shingle gravel into your catch basin and how you can increase your odds of catching all the shingle gravel. This way, it won’t get caught in the pipe and clog your downspouts.

For example, for this particular job, we had to go under a retaining wall. The side of a home is typically pretty flat to begin with, so it didn’t make sense to use a 4 in. pipe. With a 4 in. pipe pipe, the buried downspout would’ve been deep, and we wouldn’t have had any slope down the side of the house.

Instead, we kept the slope by using the 3 in. pipe, which allowed us to stay much shallower. When you go to a 3 in. pipe, you also increase your pounds per square inch. You have a higher water pressure which prevents clogging. 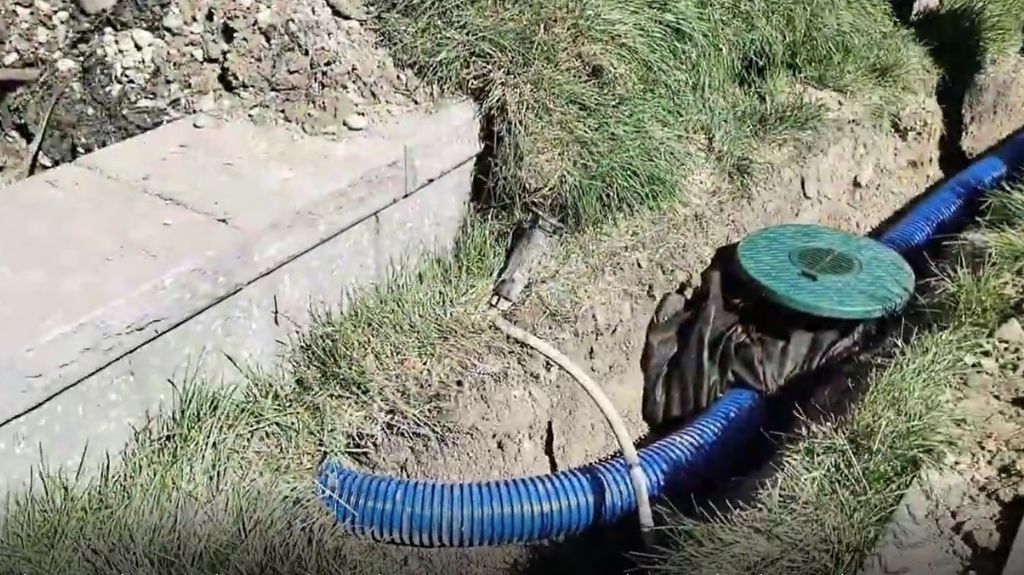 You can run up to two downspouts on a 3 in. line. Once you get to the third downspout, you want to tie it into a 4 in. main. You run your 3 in. line from the downspout to the catch basin. On the other side of the catch basin, you come out with your main (your 4 in. pipe.)

If you have the slope to go to a 4 in. pipe, and you’re able to dig deeper, going from a 3 in. to 4 in. on an inline catch basin will increase your odds of catching more shingle gravel.

You can see how we went ahead, and we necked it down to a 3 in. cleanout on the side of the house. You can see the 3 in. line running to our inline catch basin, 3 inch pipe in and 4 in. out. We’re at three downspouts, so it’s time to start the main.

We want to run a 4 in. main because we’re up to three downspouts, and a 3 in. pipe will only support two downspouts. When you have a third drop, you need to go to a line with more area. It’s going to displace more water. We took this main to a city storm drain.

Easy Clean Out Options for DIYers

I’m going to show you how to do the clean out up at the house. You’re going to want to tape these joints to make sure that they don’t leak. It’s crucial to use super sticky and stretchy tile tape. Also, I’m going to recommend using a gutter adapter for a 4 in. pipe. Then, go ahead to a 4 in. to 3 in. reducer.

Once we went to a 4 in. pipe, we had plenty of drop to get the depth we needed to put in the 4 in. line. You could see up behind the house directly, and on the side of the house, we didn’t have as much slope, so we gained a lot by using that 3 in. pipe. By not displacing a single downspout over a big 4 in. pipe, we’re able to keep up the pounds per square inch, the water pressure. That water pressure keeps the line nice and clean and prevents any clogging.

Another advantage of the 3 in. line is you can weave it through the irrigation line. Down the sides of the homes, there’s always an irrigation main or several irrigation mains. So, this 3 in. pipe worked through all those mains nicely. And when we finally got to the backyard, we had some slope and could go deeper and go into the 4 in. pipe.